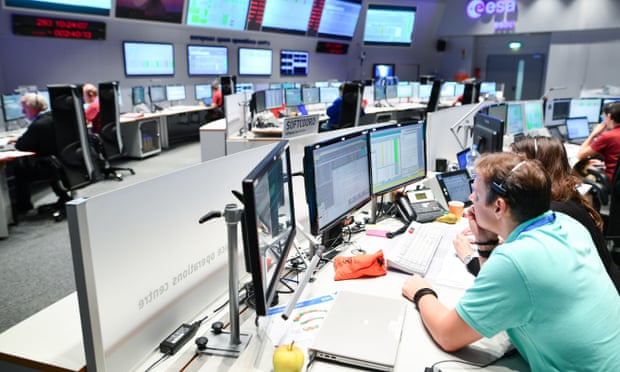 Employees sit in the contol center of the European Space Agency (ESA) in Darmstadt, Germany, Wednesday Oct. 19, 2016. ESA and its Russian partner Roscosmos hope for a successful landing of the joint space probe of mission ExoMars on Mars. (Uwe Ansspach/dpa via AP) Photograph: Uwe Anspach/AP

This afternoon the European Space Agency (ESA) will make a landing attempt on Mars. The Schiaparelli module is due to touch down at 3:48 UK time, although confirmation that all has gone well is likely to take several hours.

This is an important moment for ESA. Their previous landing attempt on Mars, back in 2004 with the UK-led Beagle 2 lander did not go as well as hoped. Although the lander reached the surface safely it failed to transmit anything back to Earth.

Today’s landing is designed to show that ESA can now land safely on Mars, in preparation for an ambitious rover mission in 2020 that will look for past or present life on Mars.So, it’s all to play for! Whatever happens today it is going to be an important one for ESA and the world’s exploration of Mars. Read more